skip to main | skip to sidebar

"I already told you a hundred times!"

If you are married, you will understand what I am talking about. My husband washed my favorite white shirt with colors again!!

At the end of this conversation, we agreed that I do not leave my whites in "our" lundry busket.

What I learned:
Do not try to educate your husband. Just find a solution.

I met a man who is taking online college classes today. I think that's great. So I wanted to encourage him and told that it took me 13 years to graduate from American college. I had to go back to Japan several times when I was broke and could not continue taking classes. I changed my major twice (that means I got 3 majors, International Studies, French and English.) 13 years. It is a long time. But with some reason, I did not quit. It was not my option. I think I needed to take such a long time to end up with majoring English which I couldn't at the beginning of my American college life. I am glad I never quit.

にほんブログ村
Posted by Isabel Durbin at 11:50 AM No comments:

Yesterday, I was watching the morning news "Today" and saw "Grandparents Scam." It is a scam targeted on senior citizens to transfer money to for example "Western Union." It is like this. A young man calls an old lady:

Of course, he is not "David," but he just says "Yes!" And he asks to transfer money to his Western Union account because he got a trouble in Canada. He says, "don't call my parents because I don't want them to worry." The old lady wants to help her favorite grandson "David," so sends her money. This is happening in the United States. You know what, I think this is originally from Japan! This is called オレオレ詐欺 "'It's me! It's me' Scam" or 振り込め詐欺 (furikome sagi) "Transfer money scam" in Japan.

I remember that the Japanese class instructer in my American college talked about this in her class. (At that time, I was observing and helping her Japanese class. Of course I did not enroll a Japanese class!) She sounded like mocking the Japanese people because they actually sent money. She said "Japanese are so naive!" I really hated what she said. This is targeted on old people who cannot tell the difference on the phone. I knew this scam because I was in Japan when it was a hot news there. And you know what, this is not only Japanese people. American people do it too. And I believe they actually thought it was their grandson. You cannot make a fun of such victims. The next victim chould be your grandmother who wants to rescue you!

Anyway, I will explain the words.

にほんブログ村
Posted by Isabel Durbin at 9:25 AM No comments:

2. 存在しなかった
This part is the verb of "私が日本にいた時は". 存在する means "to exist" and 存在しなかった is the past negative of 存在する. So 私が日本にいた時は、存在しなかった is "When I was in Japan, (it) did not exist" which modifys the part 3, "日本語".

3. 日本語
Japanes langusge or word. This part is the conclusion of all here. I wanted to explain the "日本語". What kind of 日本語? It "did not exist." When did it not exist? "When I was in Japan." Got it?

"From today, your name is Hachi"

Do you know the movie "Hachi"? Oh, you have to watch it. It is based on a true Japanese story! I do not think it was played in American theaters, but it is an American movie, stared by Richard Gere. Hachi is a dog who went to a train station every morning and evening to see his owner (in this movie, it is Richard Gere.) When Richard Gere goes to work, Hachi goes to the station with him. And in the evening, when Richard Gere gets to his hometown station, Hachi is waiting for him. But the amazing thing in this story is that Hachi was waiting for him even after Richard Gere's character's death. I think in this movie, Hachi continued more than 10 years until his own death. This movie is about the loyalty of a dog. Please watch the traler below. It is English.

And here is the Japanese official site.


Anyway, today's phrase is what I said to my dog Bojo.

にほんブログ村
Posted by Isabel Durbin at 12:59 PM No comments:

"Your aunt cannot understand it!"

にほんブログ村
Posted by Isabel Durbin at 2:18 PM No comments:

If you are a man, I do not recommend to use it. It sounds too cute. But it does not mean you should not know it. It is my philosophy. When I just came to the United States (it is a long time ago), somebody American woman said, "oh, you don't have to know it," when I asked her to tell me the definition of "bitch"! For the record, I did not know what it means at all. Anyway, the woman thought I do not have to know what "bitch" means. WRONG!! Is there any day you could never ever hear the word? ZERO! How can you tell an adult woman that she does not have to know a word you hear hundreds of times a day? Do you think I am not intelligent enough to understand it? I think it is an insult! Especially beginning of my American life, I saw tons of people (American people) who do not know that foreigners who do not speak English very well can be very smart. "She does not even speak English!" is a very common expression in America (Sorry, I still have some feelings toward this!) But it does not mean the person does not have a brain! Anyway, that is why I never say "Oh, you should not know it!" What I am saying is that you need to know everything even if you don't use the word. Trust me, this is so true. SO, Men should know what "ルンルン" means although I do not recommend to use it!

Why did I say this word? Because I made "mashed potatoes" today. I was so proud of myself. Mashed potatoes sounds so homey to me. So that is why I was ルンルン!

Do you know the best way to study a foreign language? Watch a movie or TV show millions of times until the whole entire script is tatooed in your brain! You have to say it with actors. Try to say it as similar as you can. You do not have to know the meaning of what you are saying but pronounce it! That's how I learned speaking English. 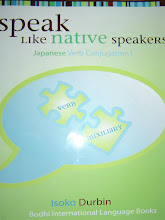 This is the reverse version. I introduce English phrases my husband said in our daily life